On the arrival of Keoua he found his cousin had grown up to be a most agreeable and fascinating woman, and soon the pair had an understanding that not a long courtship would be necessary. Kekuiapoiwa was well pleased with her cousin’s looks and manners. As compared with all previous hoaos this one excelled in magnificence, for the two young scions were blood royal of the grand old king Keaweikekahialiiokamoku paternally and maternally in direct line. Everything came off happily and merrily. Every desire of the family had been granted and hopes for the future of the nation were centered in these two young hearts. A few months passed happily with the royal family, a grand and joyous event in the realm being anticipated. The great hope was realized in the birth of their first son, Kamehameha I, destined to become the conqueror of all the islands into one kingdom under his undivided rule. A second son was Kealiimaiai. Two daughters were added to the family, named Peleuli and Piipii. Whether Kekuiapoiwa died without bearing Keoua other than these four children history does not mention, but Keoua formed another matrimonial union, this being with the queen dowager, Princess Kalola of Maui, who was queen consort to King Kaleiopuu of Hawaii, his half-brother. By this union he became the father of Liliha-nui, who espoused her first cousin Kiwalao, son of King Kaleiopuu and Queen Kalola.

Kamehameha the First, who became the most noted warrior and eventually conqueror of the whole Hawaiian archipelago, was born at Kohala on the island of Hawaii. He was the second son of Keouakalanikupuapaikalani-nui by his second wife, she being his cousin Kekuiapoiwa.

Although by lineage and blood, both paternally and maternally, this child was considered one of the highest of the high, still the kingship and the crown were in the possession of Kalaninuiamamao, the eldest born of Keaweikekahialiiokamoku, consequently Kalaniopuu at this period ruled over all Kau, Kona and a portion of Kohala; Keawemauhili was the reigning chief of Hilo and Puna, while the region from Mauna Kea to Hualalai and adjacent districts of Wai-mea was under the rule of the high chief Hinai.

From his infancy Kamehameha always showed signs of bravery and a great desire for athletic contests, spear-wielding, ulu maika, and other magnificent exercises of that period. As he grew to maturity he sought the friendship of his uncle, King Kalaniopuu, becoming a great favorite at the royal court, along with his cousin. Prince Kiwalao, the heir apparent, whose mother was Princess Kalola of Maui. 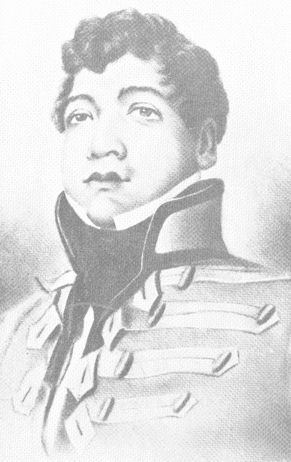 King Kalaniopuu had two other sons by different mothers, the second of the family being named Keouakuhauula, and the other Kaoleioku. The latter was by his last queen, Kanekapolei.

Thus far everything apparently was in perfect harmony. But soon the king’s health began to fail and, as his demise approached, he called for his courtiers and other dignitaries of the realm to assemble and listen to his proclamation, which ran in this wise:

“I leave all my possessions, with the exception of those heritages which I have already bestowed upon my two other sons, and the kingdom to my eldest born, Kiwalao. My akua, Kukailimoku, I leave to my nephew, Kamehameha.”

Kamehameha felt he was slightingly treated, his dissatisfaction growing to indignation, and in relentless spirit he brooded mischief and rebellion against his once adored cousin. Jealousy, envy and hatred took full possession of his soul. Perhaps he never thought of the mystic significance of the name of the idol god bequeathed to him â€” ”Kukailimoku,” the word itself meaning “I conquer.”

It did not take Kamehameha long to muster up followers in the regions of Kapalilua, Kona and Kohala, with whom he retraced his steps toward Kau, working up strife and animosity as he went along. His main object was to besiege Kiwalao’s camp. There was a fierce and bloody struggle. The Kauites held their position firmly and bravely. The two younger brothers still maintained their guard, rendering assistance to their royal brother in every way.

At length there appeared a sign of capitulation in Kamehameha’s army. Shortness of food was telling on its strength, for Kona was then suffering from famine. Instead of surrendering, however, the invaders retreated to the heights above Mauna Loa, where hapuu was abundant. Wild pigs abounded there, and yams, ohias and plantains, even the puhaia tree, provided sustenance for the lately famished crowd. Moreover, fish ponds were looted and made desolate.

However, this situation could not long continue. Kamehameha hankered for the warpath and back to Kau he must go. Young and vigorous and of grand physique, he had followers of similar caliber. Among his people were the Heulus, ancestors on the maternal side of the late Queen Liliuokalani, who became famous for their courage and skill in warfare. Also there was Kuhaupio, a noted ancestor of Luahine, grandmother of the late Princess Bernice Pauahi Bishop.

Reinvigorated by their rest, they resumed the march toward Kau. Kiwalao was not of stalwart build and, even before the clash of arms, it was apparent that his strength was failing. Neither side had won a victory when he died. 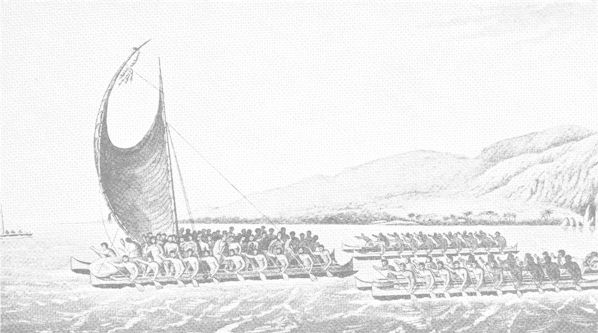 Upon the death of Kiwalao his brother, Keoua Kuhauula, placed himself at the head of the host opposing Kamehameha. Events showed the belligerent armies evenly matched. Time and time again the Konaites advanced only to be hurled back. For the second time Kamehameha counted his cause as lost. In his despair he summoned to his presence his most favored general, Keaweaheulu, and gave him this order:

“Go to Keoua Kuhauula and tell him that great is my desire to make friends (ike). You are the best one to bear the message, for you are related to his mother, and he will heed your words sooner than anything I could say to him.”

Undoubtedly plans were formed right there for the tragedy of treachery about to be related. Keaweaheulu on arrival at Kau made known his errand. Immediately the news spread to his brother Kaoleioku’s quarters, and at once that chief hastened to Keoua’s camp.

“Word has reached me,” he said to his brother, “that you are about to embark for a voyage to Kona, If such is your plan, of course my duty is to be by your side in whatever you undertake.”

“Here is our kinsman Keaweaheulu with good news from the young chief Kamehameha. To ike is the chief desire of the valiant foe. Thereby bloodshed will cease and tranquility will prevail all over the land. It is time that our dear and loyal people should find rest.”

Without loss of time preparations were under-taken for the expedition to Kona and Kawaihae. At the latter place it was expected that Kamehameha would be awaiting Keoua and his retinue. No harsh winds ruffled the seas of Kona, which on this fated occasion maintained their noted placidity. On the morning of the second day the pretty village of Puako was reached. Upon the beach the inhabitants were already waiting to extend a welcome to the two young princes of Kau. A bounteous feast was in preparation fit to tempt appetites less keen than those of guests just ending a sea voyage. Hea-Inoas, meles and dances entertained the vast crowd.

At the conclusion of the feast Keoua Kuhauula made a move to enjoy the cooling breezes from the shores of Kawaihae bay opposite, but, lo and behold, what is that which meets his gaze? A great fleet of canoes, double and single, in war-like array, was massed within two-thirds of the distance from the Kawaihae beach to Puako. In that hostile demonstration he read his doom, and it was there and then he uttered the words of historic import, in the flowery symbolism of Hawaiian diction, casting his eyes heavenward as he spoke:

“The wind clouds are gathering in the heavens for a storm” (makani luna ka hele ino nei ke ao this being in allusion to the dread scene before him) . “But come forward, my comrades, steer the prows of our barks (i mua ka ihu o ka waa) to that fatal shore yonder.”

His followers sprang to obey the command of their glorious chief, well aware of their murderous betrayal under the guise of friendship, but as dauntless as their heroic and high-born leader. But where at this moment was Keaweaheulu, the treacherous instrument of this most dastardly foul play? Before Keoua Kuhauula’s battle canoe reached the shore, it was attacked and boarded by Kamehameha’s warriors. Over-powering Keoua they bound him hand and foot, according to orders, and bore him to the landing place, where he was promptly slain.

In the meantime the prime author of this very foul deed, Kamehameha, looked down upon the proceedings from an eminence beside the entrance of his newly finished heiau, Puu Kohola. This act of Kamehameha was a big blot on his escutcheon. When the body of his late gallant foe was about to be offered solemnly in sacrifice to Kamehameha’s god, a movement was made toward furnishing the “moepuu,” or companion, in observance of the traditional custom under which the nearest relative of the principal victim should undergo the same fate.

Kaoleioku was pursued and captured, but as he was being led to the scaffold, Kamehameha, the tumult having reached his ears, at the top of his voice shouted his most solemn tabu, “Mama-lahoa kanawai:”

“Refrain; no chief even of the highest rank shall endanger the life of my keiki,” he proclaimed, referring to Kaoleioku. (“Keiki means an own son, a nephew, a cousin’s son, or even a friend’s son.) The voice of authority saved the young man’s life. It also established Kaoleioku’s family thereafter as belonging to the Kameha-meha line.

When our gracious and good King Kauikeouli (Kamehameha III) promulgated the first constitution of the Hawaiian kingdom the law of succession was established, it being set forth therein that after him the succession should fall on his nephew and adopted son, Alexander Liho-liho, the youngest son of his half-sister, Kinau, one of Kamehameha’s own daughters; then, failing an issue, on his elder brother. Lot Kamehameha; and, still failing an issue, the crown should descend to their only sister, Victoria Kamamalu. But fate decreed otherwise. Death claimed the young princess before she could claim the crown of Hawaii.

Yet the line of succession goes no further. Kamehameha HI ignored wider claims to the Kamehameha dynasty, when he conferred on the Legislature the right to appoint any alii of the realm, male or female, to be the stirps of a new-royal family of Hawaii.